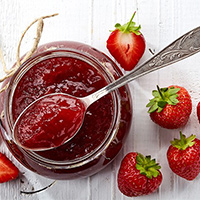 A jam and marmalade producer has been able to reduce the amount of pectin in their formulation by 20% and reduce their process times and wastage with the use of a Silverson Flashmix.
The company had previously been using basic agitators to mix the pectin in a 400 litre vessel at temperatures in excess of 55°C (130ºF). They were incorporating around 20% more pectin than they actually needed for their formulation to account for what they were losing due to agglomerates and wet pectin sticking to the agitator shaft, blades and the walls of the mixing vessel.
This wastage was costing a considerable amount of money and after the mixing process they had to put the mixture through a filtration stage to filter out all of the un-hydrated pectin, further lengthening the process time. After around 40 minutes they were left with a low quality 5% pectin solution, wasting 20% of the material they had added as the agitator was unable to break down the agglomerates.
Trials were arranged at Silverson UK using a Flashmix FMX50 to incorporate the pectin. The trials were run at ambient temperature and after around 10 minutes the 5% of pectin that had been added was fully incorporated and mixed. Using the FMX50 there was no agglomerates and no partially hydrated powder sticking to the vessel wall, so the mixture no longer needed to be filtered after mixing.
Using the FMX50 the consistency and quality of the mix was much better even after a shorter period of time. The company would be saving a huge amount of money on pectin by being able to use 20% less pectin for each batch and by not having to heat the vessel before adding the pectin. The trials were so successful they company purchased the FMX50 for their site in Manchester, UK.
Don't hesitate to contact us for more information on the report and to watch a 'How to' video on dispersing Pectin.